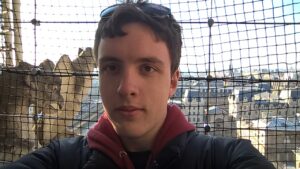 David Trevascus is an Honors Graduate Student in Astrophysics from Monash University, Melbourne (applying for PhD positions). In their honorary year, they conducted research on planetary systems around white dwarfs, and performed hydrodynamic simulations of eccentric gas discs. They are currently working as a research assistant processing X-ray image data, and they enjoy playing new board games and running a home campaign of Dungeons and Dragons during their spare time.

A white dwarf is the last stage of the life of a low-mass star like our Sun. After our Sun burns off all the hydrogen and helium in its core, it leaves behind an inert ball of carbon and oxygen. We’ve observed thousands of white dwarfs through night sky surveys, but we know little about what happens to planets around these dead stars. Is there a possibility that one day we will be able to see the remains of an Earth-like planet orbiting a white dwarf?

A phenomenon known as “mineral pollution” refers to the presence of planets around white dwarf stars. White dwarfs are covered in a thin outer layer of hydrogen and helium residue known as the photosphere. Any heavier elements (metals) present in the photosphere will sink relatively quickly out of this layer due to the strong gravitational forces of the white dwarf. So it is surprising that when we observe the chemical spectra of white dwarfs, we find that 25-50% of them contain minerals that pollute their outer layers. The generally accepted explanation for this pollution is the accumulation of planets (and other smaller bodies) on the surfaces of these white dwarfs. Today’s paper describes the first known detection of X-ray emissions from this type of accretion from a G29-38 white dwarf.

Why accumulate materials that emit X-rays? Well, it’s all about what happens when orbital matter collides with a white dwarf. In the process of accretion on the white dwarf, the orbital matter loses a lot of kinetic energy very quickly. It does this by heating to high temperatures and producing high-energy radiation (such as X-rays) that transmits energy away.

We’ve detected X-ray emissions from accreting white dwarfs before, but previous discoveries were all from binary star systems, where the accreting matter belonged to the other star. The main differences from this discovery were that the photons were focused at lower energies and that the overall X-ray luminosity of the event was lower. This stems from the low mass, and therefore low rates of accumulation, of planetary material as opposed to stellar material.

In order to determine the accretion rate of matter on the white dwarf, we first need to know the X-ray luminosity of the accretion event. This requires us to take the sum total (i.e. the integral) of the X-ray flux at different photon energies.

The X-ray flux from this event was measured by the ACIS-S detector at the Chandra X-ray Observatory. This detector is most sensitive to photon energies in the range of 1.0 – 6.5 keV. A significant portion of the detected electrons were at lower energies (<0.5 keV) where the detector is less sensitive.

The authors of this paper addressed this problem by simulating the X-ray flux generated by this accretion event. Their model takes into account the effective temperature of the white dwarf’s photosphere, as well as the composition and temperature distribution of the accretion material. By fitting these models to the observed photon energy distribution, the authors were able to determine the total X-ray flux and thus the emission event luminosity.

Previous measurements of planetary material accretion rates on a white dwarf have been based on what is known as the “steady state” model. This model assumes that the abundance of metals in the photosphere remains roughly constant over time, as they accumulate on the white dwarf and then diffuse into its core.

The authors of this paper took this opportunity to compare their new independent measure of the rate of accumulation with the steady-state measurements. They find that the measured steady-state accumulation rates are approximately an order of magnitude lower than their observations. However, they note that steady-state accretion rates do not explain the additional mixing of stellar material between white dwarf layers found in 3D convective models (as opposed to 1D models) – a phenomenon known as convective overflow. Calculation of the convective overflow results in an approximate match between the build-up rate measurements. 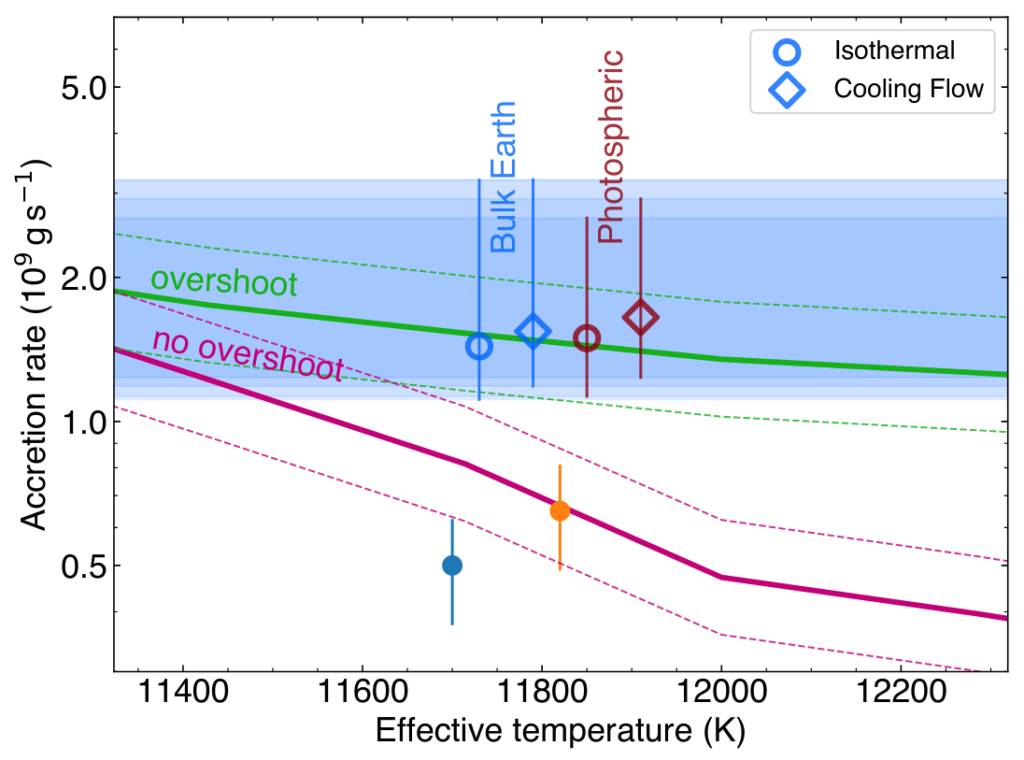 This method of measuring the rate of instantaneous accumulation of planetary material on contaminated white dwarfs should help us answer a number of open questions about how contamination of white dwarf mineral occurs. We know from infrared observations that many polluted white dwarfs also contain a dusty debris disk of planetary material (similar to the asteroid or Kuiper belts in our solar system). We do not yet fully understand the mechanism by which this substance is deposited on the surface of the white dwarf. Nor do we understand the variation we see in the infrared radiation emitted by these disks over time.

Because of the uncertainty in estimating the X-ray flux at lower wavelengths, the authors of this paper acknowledge that their measurement of the rate of accumulation is the lower bound of the true accumulation rate of planetary material. However, the authors note that future X-ray telescopes, such as the Advanced High Energy Astrophysics Telescope (ATHENA), will be able to better study X-ray emissions from white dwarf planetary systems.